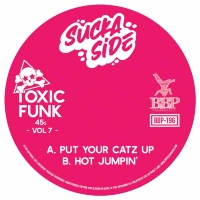 You can’t beat good original music but sometimes, despite musical fashion sidelining a musical style or genre, there remains considerable appetite for what has been sidelined and certainly more than can be catered for by people still making original music in that style or genre. It’s one of the reasons why booties are so enduringly popular and 90s hip-hop is a case in point. Enter Suckaside with Vol. 7 of Breakbeat Paradise’s vinyl 45 Toxic Funk series and brand-new old-style beats for acapellas of two of the 90s’ most party hip-hop tunes from two Cypress Hill-affiliated outfits, one consisting of the world’s most American Irishmen the other, a mere pair of young scallywags. Neither of the ‘pellas in question are what you might call underused and, unlike much 90s hip-hop (as those who were there will know), neither of the original beats were especially slow. Nevertheless, with Put Your Catz Up and Hot Jumpin, Suckaside manages to put a new-old spin (pun intended) on old material that keeps things fresh a quarter of a century later with. And the price isn’t through the roof either, which helps.
(Out now on Breakbeat Paradise)


Posted on 7th November 2021 no comments