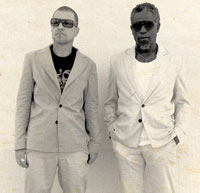 These two might look like they’ve just parked a white Ferrari Testarossa on Biscayne Boulevard on their way to a drug bust but they’re actually rather big down under. Space Invadas have blown up way huge over there and on the strength of stuff like this (see vid. for Done It Again below – released 6 December) they look set to do the same over here when their LP of future funk, Soul:Fi, drops 21 February next year on BBE Records. Done It Again (on the album and previously a single in OZ) is massive though not especially representative of the rest of the LP. Video-wise, I’m not too sure about the dancing and the chick in it seems to have borrowed En Vogue’s wardrobe but you can’t really argue with a groove of this magnitude.
spaceinvadas.com

Posted on 27th November 2010 no comments