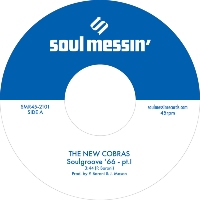 Soulgroove 66 Pt 1 & 2 is the new 45 from Melbourne’s Soul Messin’ Records then, commemorating a linchpin of the Melbourne, Australian and indeed global soul scene, Pierre Baroni of PBS 106.7’s Soulgrove ’66 radio show. Not that the man stopped at that, having also graphic designer, photographer and producer strings to his bow and a resumé that involved having worked with big Australian music names from Jimmy Barnes to Kylie Minogue. His main love was soul music though and his final studio piece is this re-imagining of jazz standard Route 66. Interestingly the two parts are separated by style as well as side of wax and performed (ostensibly, at least) by two different bands. Thus the loose-limbed, low slung funky soul groove of A-side Pt 1 is the product of The New Cobras – something of a super group consisting of members of Cookin’ On 3 Burners, a current and a former member of The Bamboos and Renee Geyer on vox. The flip meanwhile is a slinky jazz instro apparently, and fittingly written as the music bed over which Baroni weekly thanked the patron members of the Soulgroove‘66 program. A fitting ode, then. All sales proceeds for this 45 go to PBS 106.7FM.
(Out now on Soul Messin’ Records)
ORIGINAL TEXT COPYRIGHT: Stone Monkey/ monkeyboxing.com (2021) – Soulgroove ’66

Posted on 12th September 2021 no comments