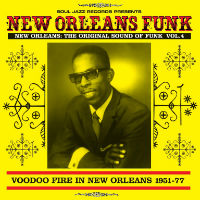 Soul Jazz Records‘ New Orleans Funk series is one that should need no introduction. Vol. 1 came out in 2000 and established a benchmark for funk compilations both in terms of killer content, scrupulously researched liner notes and audio quality that no other label has thus far equalled. It was subsequently followed by three sequels – the ‘real’ second volume (entitled Saturday Night Fish Fry) and then two official sequels – Vol. 2 and 3. If there was any grumble at all, it might have been that the latter of these contained fewer dancefloor-oriented cuts than the others. Not so Vol. 4, subtitled Voodoo Fire In New Orleans 1951-77 which arrives sixteen years after the first in the series and decisively re-establishes the series as a go-to for rare floor-filler material, despite possessing the same relative brevity (‘only’ eighteen tracks instead of more than twenty) as its immediate predecessor.

As the ‘1951’ part of the subtitle implies, this compilation – as all previous volumes – also explores the pre-history of funk and soul which explains the presence of early fifties cut Junco Partner by James Waynes featuring prominent ‘second line’ type percussion and the driving rhythm of Dave Bartholomew’s late fifties number The Monkey. At the other end of the spectrum is Chocolate Milk’s squelchy synth-powered Action Speaks Louder Than Words. In between is the motherlode of golden-era Crescent City funky soul. There are multiple cuts produced by Allen Toussaint and Eddie Bo alongside independent one-offs, and tracks on which The Meters lurk anonymously behind the scenes as ‘the band’.

Some names will be familiar. Eddie Bo fronts the antsy funk of Can You Handle It, Betty Harris appears with the downtempo soul walk of I’m Gonna Git Ya and if David Robinson’s uptempo I’m a Carpenter sounds familiar – it might be because there is about a hair’s breadth of difference between the music on this and the backing to Chuck Garbo’s Can I Be Your Squeeze from Volume 1. The best of the cuts from the ‘regulars’ though are the clattery funk of opening Eldridge Holmes heater Pop, Popcorn Children, the soaring funky-soul of Johnny Adams’ You Make A New Man Out Of Me and Chuck Colbert & Viewpoint’s massive wah-wah burner Stay. The other biggest tracks come from artists who haven’t previously appeared in the series – Norma Jean’s low-slung funky sister soul cut No Competition, the hypnotic psych-funk of The Barons Ltd.’s Making It Better, and the sinuous Zilla Mayes’ closer All I Want Is You. The phrase ‘voodoo fire’ is no understatement.

Posted on 30th November 2016 no comments