SOUL FLIP EDITS 6: I Can’t Get Next To You (WONDERLOVE Re-edit)/ Swim (WONDERLOVE Short edit)(Vinyl 7″) 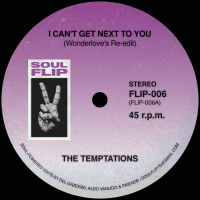 Seeing the post title here, some of you might be thinking, ‘Er – but what happened to Soul Flip Edits 5? The last one I remember was Soul Flip Edits 4!’ And you’d be right. Don’t panic though. Turns out there’s been an issue at the pressing plant and in an endearingly analogue type of way, number 5 will now arrive out of sequence. In the meantime, what the Soul Flip crew can get, next, to you is Soul Flip Edits 6 which featuring a brace of reworks from guest producer Wonderlove. First up is a re-edit of The Temptations’ floor-filling I Can’t Get Next To You now with additional chunk and a heavily extended bridge. What could Mr W possibly pair with such a beast that would carry a similar presence? How about leaping into remix waters once more with an edit of Jack Hammer’s Swim? That’ll be the 1971 flip to his Colour Combination 45, now featuring an extended bridge (not to mention extended intro and reworked ending) along with some extra drum leverage. A case surely of ‘swim baby swim, swim the ocean wide! You got to swim baby swim and play those 45s!’
(Out 21 January on Soul Flip Edits)