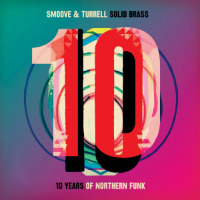 Howay man! Was it really as long ago as 2009 that Smoove & Turrell burst onto the scene with debut album Antique Soul prompting the monkey to re-name Smoove, ‘Berry Geordie’? You’d better believe it! Ten whole years of solid brass – er – I mean solid gold releases – and whether you call it ‘northern funk’ or ‘northern coal’, it’s been a whirlwind ride of world-beating music that has seen the pair release five albums, receive constant heavy radio playlist rotation and even tour with heroes Chic with nary a sign of slowing down. And now to celebrate, comes the release of double gatefold album Solid Brass: Ten Years Of Northern Funk (in brass-coloured vinyl, no less!) comprising sixteen cuts drawn from all five LPs along with two new and previously unreleased tracks. It works all the band’s musical angles functioning as both a retrospective of and primer for the band’s sound in which Turrell’s meaty voice (as equally at home belting out stadium soul as it is heartwarming folksy intimacies) finds the perfect foil in Smoove’s funk, soul and disco-laced production in a “twenty-first century, blue collar amalgam of Chic-style disco and northern soul”.

The neo-northern soul is on there, of course, in the shape of monster early hit I Can’t Give You Up and Hard Work while the neo-disco is even more in evidence with Yazoo cover Don’t Go, Broke, I Feel Alive, In Deep, Have Love, and above even these, the superb Will You be Mine. Which still leaves plenty of space for those numbers which lie in between or outside of these two poles like massive dance-floor groovers Slow Down, You Could Have Been A Lady and Beggarman, among others. And the unreleased stuff? Well, if you know Smoove, you’ll know he’s been obsessed with the Spencer Davis Group song I’m A Man since forever and the number of remixes and edits he’s done of it seem to be legion. Plus if you’ve seen the band live, you’ll know it’s also live favourite so it’s little surprise that they’ve finally laid down a studio version which is every bit the bomb you’d expect. The other one is the evocative Give It Back which finds Turrell wistfully giving props to those who – well – ‘give it back.’ It’s a canny hook that like all classic hooks is general enough to have universal application but pointed enough to carry some topical social commentary. As a retrospective, Solid Brass… is a pertinent reminder of world-beating homegrown UK talent from outside the London and public school bubbles, while as a primer it provides a sterling collection of nuggets and yet leaves so many more to find – Hammond, Play To Win, Now Or Never, Now That Love Has Gone, Glue Bag Flags being just a few. Belta!
(Out now HERE)

Posted on 26th February 2019 no comments