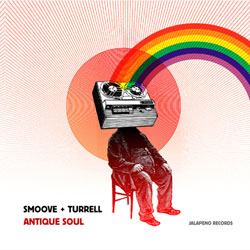 Take a couple of blokes who could pass for those two Geordie builders who drink in your local, put them together in a studio and what do you get? If the two in question are Smoove and Turrell the answer isn’t a new stud wall and the faint whiff of battered Mars bars but Antique Soul. In other words a heavyweight northern soul-influenced collaboration with the gritty credibility that other nu-soul pairing Mark Ronson and Daniel Merriweather just can’t seem to muster and more crossover power than Moses at the Red Sea. Because when this is on, it’s really on.

On the one hand you’ve got John Turrell – surely the unlikeliest man in the world to possess the classic soul rasp that he does and Smoove’s slabs of thunderous rhythm – both factors which elevate this above the competition. Breakbeat bomb Hammond kicks things off (I can only imagine your surprise at discovering that this is centred around a huge Hammond hook) and Turrell’s insistence that, “You’re so, so dirty,” also delivers a promising lyrical beginning. It’s a track that is immediately seen however, if not actually raised, by the steroid-pumped pre-breakbeat Motown rhythms of next one – I Can’t Give You Up.

Third track You Don’t Know is more chilled but solid nonetheless – though the presence of a saxophone lends this an 80s mainstream feel that at times is the album’s Achilles Heel. There’s just something about a certain kind of saxophone playing that brings to mind a ponytailed man, suit-jacket sleeves rolled up to the elbow, silhouetted against a wet, nightime cityscape flecked with neon. And unfortunately the next three tracks summon this image far too effectively. So I’m not joking when I say that I could feel the uncomfortably close presence of Sade, Courtney Pine and 80s’ George Benson during The Difference, Hypnotized and You Got Me Bad as Turrell gives himself over to slick harmonies and only Smoove’s breaks remain to protect your immortal soul.

Happily, sanity is restored with forthcoming single, Beggarman – a soaring nu-soul anthem during which Turrell considers the current economic recesson and concludes that far from all that bollocks about ‘quantitative easing’ what you really need is to get down the, “Beggarman’s disco,” in order that the, “bad times don’t get you down.” Well, I’m always up for a boogie – as long as it’s not house music. Obviously. Subsequently, in a masterstroke of cover-track genius, 80s synth pop-duo Yazoo’s Don’t Go gets the Smoove & Turrell treatment, Darker Days delivers some brooding menace, and the pair outdo even Hammond for most inventive title with the subsequent Latin Groove which is, of course, a bit latin, and a bit groovy. Finally, things get all moody again with Without You.

Antique Soul is packed with either bangers or tracks that have that sure sign of a classic – the sense that you’ve heard it somewhere before – although actually you haven’t. Even if it does stray from the righteous path of funk into 80s ‘saxy-land’ at times, Antique Soul demands your attention.
Out now on Jalapeno