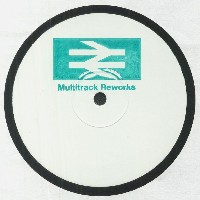 The British rail network might be a fragmented privatised disaster but northern funkster Smoove is all up together with not one but two of his Multi-Track Reworks arriving in a timely and efficient manner for the people. Vol. 2 sees him donning his disco hat to give three 70s and 80s giants some proper time and investment and, indeed space, since this is on the largely forgotten wax format of late, the full twelve inches. He then tweaks headgear for Multitrack Reworks Vol. 3 where he performs a similar trick with three 70s disco-tinged funk and soul cuts (including a nugget by his namesake Johnny ‘Guitar’ Watson) – again on a vinyl 12″. Dancefloor edits a nation can be proud of, then! Best get your skates on if you wanna catch this soul train though; these puppies’ll be flying out of the station promptly.
(Out now on Multitrack Reworks US)