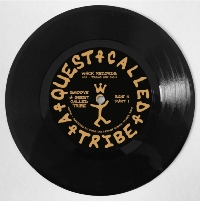 You can’t accuse Smoove of letting the grass grow under his feet when he’s not engaged on Smoove & Turrell business, for here is epic new vinyl 7″ cut n paste mix A Quest Called Tribe which tops even his previous Main Sourced 45. Where that project saw him take a mere three months to splice together every sample on Main Source’s first LP Breaking Atoms in order to fill two sides of wax, A Quest Called Tribe has seen our man take a whole year to sift through hundreds of samples across A Tribe Called Quest’s recorded career and distill his findings into this brand new cut n paste tribute. A year? Christ! The dedication! Roy Castle would have been proud. Not to mention Tip, Phife, Muhammed and Jarobi. Audio below – though you’ll note you’ll have to contain yourselves for two months before this puppy drops.
(Out 30 March on Wack Records)