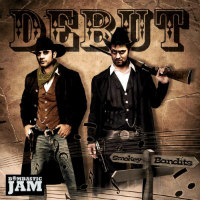 Smokey Bandits debut – er – Debut was big in Greece when it first came out. And yet this thirteen-track collection of original instrumentals created by Basement Freaks‘ George Fotiadis, his homie Quasamodo and ragtag band of rebel musicians (no doubt unshaven types, with a glint in their eyes and bandoliers criss-crossing their chests) slipped under the radar elsewhere. Somewhat unfairly, one might argue, since it’s an agreeable collection that channels those Mexican-bits-in-soundtracks-to-westerns as well as Balkan beats, swing beats and jazzy psychedelia both ably and evocatively. While Revolucion Valiente is all dawn at the Alamo, Return Of The Gypsy is a firelit knife-fight over a dark-haired beauty on the fringes of Istanbul. The Rooster is twenties Paris in the small hours, Subway Hustler forties New York, Holidays In The Sun Route 66 (via a stopover in Athens) and A Son’s Lament a hot Sicilian afternoon – all filtered through a breakbeat prism of course. Well – it is Basement Freaks and Quasamodo.

Since the album’s first release two years ago, Basement Freaks’ Bombastic Jam label has blown up and now plays host to the albums well-deserved re-release. ‘Will you play Smokey Bandits in your car stereo?’ asks the promo audio feedback form in a question that few ask but more should consider. Undoubtedly. But I might also bump it on the ipod, on the home stereo system and to the people via the medium of a club and bar sound systems. By rights they should at least be big in Japan.
As a Brucie bonus they’ve also put out a free DL, Cape Juby – see last player below…
(Out 1 May on Bombastic Jam)