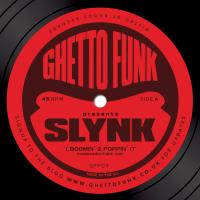 The Ghetto Funk label’s ‘artist series’ of wax EPs continues apace and next up is Oz producer Slynk whose four-tracker sees the light of day early in the new year. The Brisbane-based dj/ producer dips into seventies and eighties disco and soul and nineties rapapellas (most obviously Screechy Dan on opener Boomin’ for example but also bars from Biggie and Q Tip on Poppin It) to keep it as resolutely upbeat as its predecessors. Lest that make it sound like the de rigeur wobbly bass is missing, put your fears aside. It may be understated but it’s there certainly, slyly doing it’s thing behind the mirrorball like some sort of dancefloor perv. And where’s the harm in that? As a Brucie bonus cop a video of Slynk’s re-version of the Three Degrees’ You’re The Fool below the player. Still one of my favourite bootlegs of all time.