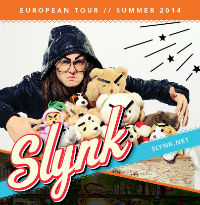 Having made his escape from one former British colony in the southern hemisphere to an even larger one in the northern hemisphere, Oz west-coaster Slynk is now heading for the olde worlde for a June tour. He even makes landfall in the Great British motherland for one date. To what vast and storied metropolis will he take his party breaks experience though? Perhaps the daddy of them all – London? Scottish capital Edinburgh? Bass city, Bristol? Try Bradford. He’s clearly a man who likes his curry – shame about the weather. Wisely, he spends the rest of the tour in sunny southern Germany and the vicinity of the Med before returning to the less climatically blessed Amsterdam. One can only imagine what forms of consolation he will find there…Tour dates below and don’t forget to cop Slynk’s pumped up twenty-first breaks rerub of DJ LBR and the very shouty Big Ali’s Real Party below that…