SKEEWIFF: Put Your Hands Together 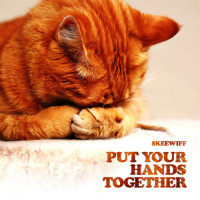 Ladies and gentlemen, it’s always an event when a Skeewiff album comes out so put your hands together for the new LP entitled – er – Put Your Hands Together. Of course posting about such an event a month after its release could be seen as somewhat remiss – but then that’s the autumn release schedule isn’t it? Everything comes at once and trying to stay on top of the deluge is like trying to push piss uphill with a tissue. We’ve all been there. But how to rectify an oversight on such an epic scale? A track-by-track breakdown is probably the very least the monkey can offer, especially when the LP features no fewer than four guest appearances from Jungle Brothers legend Baby Bam, the same number from The Brand New Heavies, two from piano virtuoso Dan Hewson and one from Kitten & The Hip – not to mention a cover with an only partially-covered pussy on it. Blimey!

1. STARSKY & JUNE feat. THE BRAND NEW HEAVIES
A super-heavy Shaft-esque wah-wah-drenched opener is always going to be a winner…

2. I DON’T FOLLOW THE TREND feat. BAM (JUNGLE BROTHERS)
…but then so is an old school jam featuring one of the Jungle Brothers. Bam and the ‘Wiff buck the vogue for shit-hop and take it back!

3. TOO BUSY TWERKIN’ feat. KITTEN & THE HIP
Of course it doesn’t hurt to include an earworm party-wobble-funk cut coming on like some sort of alt-Black Eyed Peas…

4. FLYER THAN A LOTUS feat. BAM (JUNGLE BROTHERS)
..and everyone likes a good play on words. And they also like a good-time funky-horns groove, phat rhymes and a gospel bridge.

6. CONSPIRACY THEORY feat. THE BRAND NEW HEAVIES
Ahh spy funk. Bring on the Rhodes – wait by the phone for all the sync requests.

8. COSMIC SPACE JAM feat. THE BRAND NEW HEAVIES
Does precisely what it says on the tin. Pharrell was probably sniffing around while this was being made.

9. PUT YOUR HANDS TOGETHER feat. THE BRAND NEW HEAVIES
Lilting jazzbo instro shimmy-along for those live gigs where someone’s got to replace a guitar string or the vocalist needs a piss or something.

10. CHEEKY CHARLIE feat. DAN HEWSON
A.k.a. this one’s swing beat anthem. It’s all nipple tassles at dawn and jazz hands showdowns. DJs at burlesque nights will lap it up!

11. SET IT OFF feat. BAM (JUNGLE BROTHERS)
Which just leaves time for one more slice of funky hip-hop…

12. I NEED YOU feat. DAN HEWSON
…and a pumping bit of jazzy nu-disco.

COMMENTS: Yep – that’s a set that deserves a round of applause as these scene grand-daddies twenty years into their career show they can still knock out something crowd-pleasing for pretty much everyone.

BEST TRACKS: I Don’t Follow The Trend, Too Busy Twerkin’, Flyer Than A Lotus
(Out now on Pedigree Cuts)

Posted on 19th December 2018 no comments