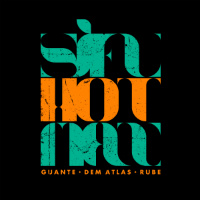 Introducing Sifu Hotman – not the martial arts master and full time fanny magnet (or pussy magnet if you’re across the pond) that the name might imply but the coming together of rappers Guante and Rhymesayers-signing Dem Atlas with producer Rube. The trio’s debut LP is called Embrace The Sun by name and phat uptempo hip-hop with lyrics that once upon a time were called ‘conscious’ is the game. Expect to find ten tracks (including a Lewis Parker remix) of the sort of thing that appeals to heads with a greater affinity for the sterling ‘fast rap’ work of Phill Most Chill, DJ Format and Jorun Bombay than for emo-rap tedium, fallen-off underground legends trying to make a an over-produced comeback or mainstream Guetta-style hip-house shite. This one’s all about Matches and the title track. Double-bass lines, crunchy necksnap drums and verse like, “Something like a phenomenon/ Rhyme book like the Necronomicon…I’m the best at what I do and what I do isn’t very radio friendly/ So tell your favourite rapper, ‘come and get me.'” Word.

Posted on 7th August 2014 no comments