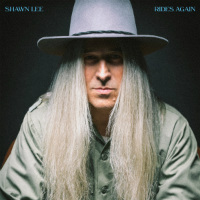 What better title for Shawn Lee’s long-gestating country-soul album than Rides Again? For Mr Lee has been in the musical saddle since the latter half of the 90s and in a variety of guises too – though always with an undercurrent of the funky. What this project does is pull together his long-held desire to use that particular title at an appropriate time to take stock of where he’s at now, a quarter century into his career with (as he puts it) more years behind him than ahead of him. The LP intertwines the vintage country and soul sounds of Lee’s youth with very personal lyrics that draw from Lee’s own experiences growing up in Wichita in Kansas and is Lee’s first vocal and songwriter album since the Japan-only release of Harmonium back in 2005.

First up is former single Wichita – a track which it seems has been riding a lonely trail around Lee’s ideas file for over ten years denied companionship as other projects kept getting in the way. And while there’s not a little of the AOR about the sound of this track (not to mention rather more country, than soul) it’s hard not to warm to its lyrical wearing of heart-on-sleeve. Next up is the pedal steel-powered country psychedelia of Wherever The Wind Blows featuring vocal turns and melodies that have got shades of Pet Sounds-era (and beyond) Beach Boys about them (features also shared to some extent by lost-summer paean Losin’ My Mind) while the banjo-tastic and country-slide laced Crystal Springs‘ tribute to (presumably) the Kansas township vies with Yesterday Tomorrow Today for most country of all the tracks featured. Brown-Haired Woman leavens the country with a heavy dose of soul however and the beat is one of the funkiest on the album along with those of earworm Farmer Brown (featuring one of Lee’s trademark lo-fi synth drum breaks and a nursery rhyme-simple hook) and the strummy almost-Latin rhythms of Kansas City Summer. The remaining two cuts are instrumentals. Mr Maestro is jaunty lope that turns on another synth drum cut and characterised by vintage keys and wah-wah that were once the province of Keyboard Money Mark, while closer Joyland is once again all strummy and evocative of better times, long ago when Lee’s musical inspirations for this project, Tony Joe White and Glen Campbell, were still extant. Come to think of it, I reckon they’d have been pretty happy to have come up with this themselves. Rides Again then – a musical trail for which you’ll be happy to keep getting back in the saddle.
(Out now on Legere Recordings)

Posted on 10th December 2019 no comments