SHARON JONES & THE DAP KINGS: Give The People What They Want (2014) Album review 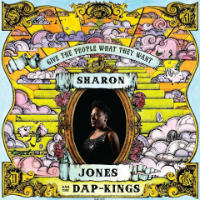 The release of the fifth studio LP by Sharon Jones The Dap Kings, was delayed last summer due to the small matter of the reigning queen of retro funk and soul having been diagnosed with cancer of the bile duct. As fans of Jones’ will know from her lyrics (not to mention live show banter), she’s not a lady to take any shit, even if the villain is a carcinoma. Having sent that packing with surgery and six months of chemo though, she’s now ready to tour the new album. However, the last two LPs have received mixed critical response – will this one Give The People What They Want? Let’s find out:

1. RETREAT!
…as in none whatsoever. The album-opener and also the album teaser track (see video below) delivers a bold soul statement Holland-Dozier-Holland-style.

2. STRANGER TO MY HAPPINESS
…but not to mine. Check the dirty baritone sax groove on this nifty little dancefloor soul shimmy. Banger.

3. WE GET ALONG
Much slower groove that would have fit perfectly on the last two albums which is to say…next!

4. YOU’LL BE LONELY WHEN I’M GONE
Still slow but wayyy more low. Swamp-funky chukka-chukka groove, an It’s Your Thing-type melody, a half Bongo Rock/ half-Mexican trumpet horns vamp in the middle and Sharon laying it down. That’s more like it.

5. NOW I SEE
Uptempo Motown stomper where a perfect storm of darkly epic horns ushers in the chorus. Will have them tearing up the floor at all-nighters…

7. GET UP AND GET OUT
More Holland-Dozier-Holland-style antics. I’m not complaining…

9. PEOPLE DON’T GET WHAT THEY DESERVE
The uptempo sound of sixties Detroit gets yet another look in. Man, the dancers in those all-nighters are going to need extra talc and speed.

10. SLOW DOWN, LOVE
No you don’t get any points for predicting that this is a romantic slowie.

COMMENTS: Damn – this is the best thing the band have done since 2005’s Naturally! All pretenders to the throne need to check themselves again. Classic song-writing and peerless production – it’s what the people want. And while it’s early to call, I have a strong feeling this will be on the monkey’s top ten LPs of 2014…

BEST TRACKS:
Retreat! – Stranger To My Happiness – You’ll Be Lonely – Now I See – Making Up And Breaking Up – Long Time, Wrong Time
(Out 14 January on Daptone Records)

Posted on 2nd January 2014 no comments