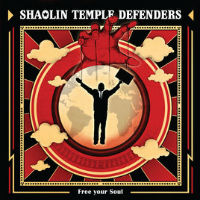 The return of the band with the best name in contemporary funk is imminent with their new album and sixth studio LP, Free Your Soul, all set to drop and man are they fired up! Naturally, if the band in question is called Shaolin Temple Defenders and they’re fired up the first place anyone is going to point the finger is at the White Lotus Clan. In the event it turns out that Pai Mei’s lot aren’t even in the frame this time since what is really exercising Bordeaux’s finest deep funk outfit is ‘the one per cent’ – that tiny self-styled ‘elite’ operating without what Apocalypse Now‘s General Corman might refer to as, “any decent restraint…[and]…totally beyond the pale.” Precisely the sort of thing, in fact, that might lead a deep funk band to put a sinister puppet master’s hand dangling a suited and suitcase-toting figure superimposed over a globe on its album cover, feature a track called Panama Papers and drop some rock guitar into the mix. Blimey. Perhaps we’d better enter this sixth chamber of Shaolin and find out more.

The opener and first single taken from the LP, Out In The Sun, sets the tone in multiple ways. It incorporates a vocal sample of Edward Norton in Fight Club and hits out lyrically at both the wage slave existence and those who create the conditions in which it can thrive. Furthermore, it does this while employing a jaunty deep-funk groove that also periodically features squalling rock guitar. The effect of this is to situate the track musically at the intersection of a two-circle Venn diagram in which the non-deep funk circle is the lighter sort of Californication to Stadium Arcadium-era Red Hot Pipe And Slippers. The nods to rock don’t end there either since singer Brother Lion delivers a decidedly Kiedis-ish rapped verse/ sung hook and the guitarist unleashes his inner RATM to vent righteous anger at corporate greed once more in Panama Papers. Things get more conventionally Hammond-funky on Stop Whining though no less insurrectionist in pitching a rousing ‘sick of your shit’ message at the one per cent. Highlights elsewhere include Running Away which provides a rather more conventional lilting nod to Motown love songs, Starting All Over which takes the soul in a northerly direction, and one of the monkey’s favourites on the album – Stand For A New Life which takes things in a new direction – specifically that of New Directions-era Meters funk grooves. Shaolin Temple Defenders then – still kicking ass.
(Out 20 October on Soulville Bordeaux)