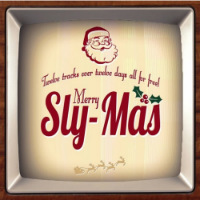 Shaka Loves You are the production team that just keeps on giving aren’t they? And what more appropriate time of year than this – the festive season of Christmas which henceforth shall be known as Sly-mas in honour of their planning to give away no fewer than twelve booties in twelve days – a.k.a. Twelve Days Of SLY-mas – I think you’ll agree that’s quite a lot of booty. Expect to check rerubs of Jurassic 5, Kool & The Gang, Chuck D, The Bar Kays, Jurassic 5 again with a bit of The Meters thrown in, Earth Wind & Fire, Herb Alpert, Gino Soccio, Pointer Sisters, The Spinners and Eddie Harris …something for everyone’s funk and hip-hop tastes in other words. Keep your ears peeled for the monkey’s favourite – a splendid Snoop vs Brothers Johnson collision. Already up are their rerubs of J-5’s Concrete Schoolyard and Kool & The Gang’s Let’s Go Dancing. Cop them below – don’t sleep on the rest!

Posted on 15th December 2015 no comments