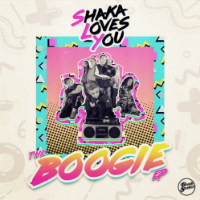 Did you catch Shaka Loves You’s recent Boogie single on Bomb Strikes? You know, the one featuring Fullee Love (a.k.a Jurassic 5’s Soup) in full funk vocalist mode? I hope you did as it’s the boys’ best track ever and finds them hook n slinging their way to something rather special. Now it’s the turn of the Boogie EP from which that cut was lifted. Of the other three tracks included on said EP, opener So Funky features cutmaster JFB and provides monstrous funk-rock breaks while Flippin’ Ya Mind gives versatile vocalist and fellow Glasgow-based artist Ant Thomaz room to air things out over a bass-heavy groove. Meanwhile, Livin’ For Tonight provides a disco-soul flavoured platform for rappers Natty Speaks and Profit. The title track is still king though – altogether now, “You put your right foot in/ and now you leave your left foot out/ You shake it then you turn it all about/ Now let me tell you what it’s all about/ You got to get loose and go hard/ Ain’t nothing to lose but your job!”
(Out now on Bombstrikes)

Posted on 5th December 2018 no comments