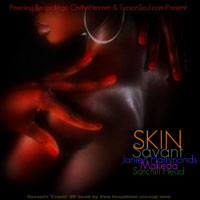 Emcee Savant’s latest pursues sultrier avenues than recent ‘jawns’ (he will insist on calling them that, he’s American you know) and he’s such a lady magnet he gets not one but two on his record – spoken word artist Janien Hammonds and singer Makeda a.k.a. TheeRedFox. Then he goes and gets producer Satchill Head to put together a beat which samples classic eighties soul legend Sade. The smooth operator. You’ll see what I did there if you’re over a certain age. If you’re not over a certain age just remember to pronounce Sade as ‘Shar-day’. And there you have it – it’s extremely unlikely you’ll hear a sexier piece of music for the rest of the year so you need to start downloading now as you’ll be wanting this to fuck to.