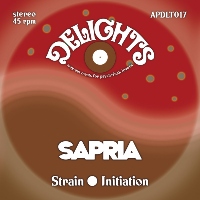 If one label has become practically a byword for quality psych-funk and library-style music over the last few years, it’s Markey Funk’s Delights Records, so it’s always a pleasure to hear what’s next. And what’s next is new 45 Strain b/w Initiation. It’s the debut release from latest Delights signing Sapria – a project born out of a 2018 studio session and featuring an Israeli-German line-up of Turbans-drummer Yadin Katz, bassist Itai Anker and both Sun-Ra Bullock and Markey himself on the keys. A-side Strain is the livelier of the two cuts on which retro key stabs, chords and FX stalk a drum break which periodically feels on the edge of a nervous breakdown due to the ‘broken beat’ fills with which (at least initially) it is punctuated. Around the halfway mark though, John Carpenter-ish key-work comes into play and the percussion goes into adrenaline-panicked overdrive after which it’s a race for an end as ambiguous as the track’s title. On the flipside, you’ll also find Initiation, less a track than a musical incarnation of a malevolent prowler lurking in the shadows. Be afraid, be very afraid, but definitely get yourself a copy before it sells out!
(Out 5 May on Delights)