SANTA SEMELI AND THE MONKS: Where Is The Disco In This Town? 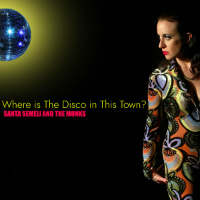 Looks like today has become ‘disco day’ this week on MB so what better time for London-based outfit Santa Semeli And The Monks to ask (with tongue firmly in cheek) Where Is The Disco In This Town?. Like they don’t already know. Coupling a pumping but funky late seventies groove with the Bowery-flavoured campness of the video (performance artistes and arch looks abound), the outfit fully embrace the pan-sexual coke-dusted spirit of an era with the sort of hook that could gain them instant entry into Studio 54. Turns out there’s even vinyl on the way – though whether this, in keeping with the era in question (not to mention the nature of the music), provides the full twelve inches remains to be seen.
(Out now on Cosima Music)