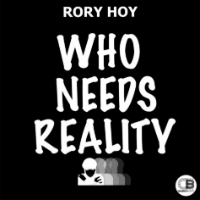 Right, turn up the radio and listen to this, Rory Hoy is back with what must surely be the banging-est slice of big beat since the early ’00s: Who Needs Reality? No, that last bit’s not a sly dig at our Rory’s obsession with the sound of London’s Heavenly Social Club and Brighton’s Big Beat boutique circa 1995 – that’s what the new album is actually called – and it’s ten tracks of mainly
amphetamine-fuelled big beat and amyl house that the Chemicals, Lo-Fidelity Allstars and Monkey Mafia would be proud to claim as their own.

Proof of the above can be found in the way Mr Hoy’s latest long player begins with the feel-good breakbeat boom and cartoon scratches of Turn Up The Radio. Having laid the album’s big beat credentials on the table with that, he moves to the pounding, sub-y Here We Go which brings the amyl house noise like an uptempo version of Depth Charge’s Blue Lipps hitting the disco. Then it’s back to the big beat with monster cut We Gonna Rock that pairs crashing uptempo drum breaks with an insanely banging A Skillz-ish bassline, sirens and the sort of nasty guitar much beloved of kindred spirits Liam Howlett and the boys before the vibe swings once more back to amyl house in the form of Four Shades Of Purple. Lest you think the man predictable, the next track though, History Repeating, is a busily percussive 135 bpm roller while After The Storm drops right down to trip-hop speed for – well – a slice of atmospheric trip-hop. Resting’s for pussies right though? Which no doubt is why the album’s seventh (and title) track pastiches both Poison-era Prodigy and Josh Wink’s Higher State Of Consciousness. The final trio consists of big beat n bass splice My Kingdom – a.k.a the sub-genre formerly known as ‘jump-up’ drum n bass – a second trip-hoppy effort, Jo, and one final venture to the borders of big beat with jazz-tinged (no, really) closer Let’s Make Believe. Who needs reality indeed?
(Out 24 November on DivisionBass Digital)

Posted on 21st November 2017 no comments