RORY HOY: The Other Side Of Forever EP 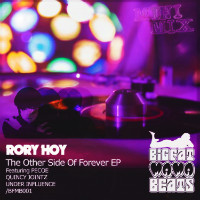 Who better to provide the debut release for Terence ‘Pulpfusion’ Thöny and Kim ‘Wiccatron’ Sørensen’s new label Big Fat Mama Beats than the UK’s like-minded Rory Hoy – a man for whom beats can never be big enough? Frankly what else would you expect from an entity created solely for the furtherance of ‘big beat, breakbeat, nu-funk and break tech boom-bap’ – and I refer to the label not Mr Hoy – though he would not be unflattered perhaps to find himself described thus.

The seven-tracker consists of five original cuts (three of which are collabs.) plus two remixes and you can expect little less than a full-on breakbeat assault at all times. Opening Hoy/ Quincy Jointz collab. Bounce If You Want To is the least hectic of the originals but even its mid-tempo breaks seem to assume a well-amped listener. The other Hoy/ Jointz collab. is Funk On Funk Off which peddles a nifty line in what seem to be sampled New Wave-era guitars, while Everybody’s In The Club is the disco-big beat crossover belter. And if closer The Other Side Of Forever employs all manner of house-stylings (a piano-based breakdown, diva warbles on said breakdown, orchestral rises and swells) it also features simple but jackhammering breakbeat drums. Which leaves the best original in the shape of the crashing drum breaks of big beat b-boy banger Just So Fresh (feat. Under Influence) along with Pecoe’s bass-synth heavy rerub of Funk On Funk Off and Jack & Jointz’ more wafty version of the same – arguably the mellowest thing on the whole release. Though as earlier noted, use of the word ‘mellow’ in this context is a relative concept at best. It might be well over twenty years since its advent but clearly the big (not to mention fat and mama) beat goes on.
(Out now on Big Fat Mama Beats)

Posted on 6th February 2018 no comments