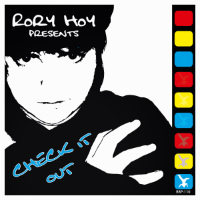 Check it out diehard big beaters! Rory Hoy goes all ‘Beat Bastik’ on your asses with his new one – er – Check It Out, marking his return to Breakbeat Paradise. That’ll be five turbocharged neo-big beat numbers then. Bak2thaoldskool is the banging acid-house-fuelled opener, Keep The Music rocks an infinitesimally lighter nineties-soul path – as female vox and house pianos float atop crunching rhythms, Party Sides is about as ‘core as big beat gets at punishing industrial-strength, while Rok Rol reverts to pianos for the epic opening sequence after which the horns and space-funk synths kick in. As it ought to be though, the title track is the daddy, turning on a vocal sample and grungy guitar loop that Fatboy Slim would be proud of. Ain’t nuthin’ but a party goin’ on in here.
(Out 28 August on Breakbeat Paradise Recordings)