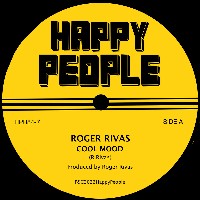 You know how Happy People Records occasionally likes to release a cut by latter-day reggae organ legend Roger Rivas of The Aggrolites/ Night Owls fame? Well here’s the next one – Cool Mood. That’ll be an instrumental Studio One style rocksteady number then will it? Laden with organ parps and riffs as is Mr Rivas’ wont? Certainly will. Wonder what’s on the flip? The A-side versioned in a dub stylee perhaps – as is traditional? The very same. Obviously, you need to be aware of this now, even if the wax isn’t out till the start of December because you know these bad boys (only 200 copies of this one pressed) don’t hang around – you can even download the track digitally now for nowt while you wait for the wax which should put you in a very happy mood. Apparently, that’s not the end of the Rivas news either – so watch this space.
(Pre-order now/ Ships on or around 1 December on Happy People Records)