ROCAFORT RECORDS: Funk For The People 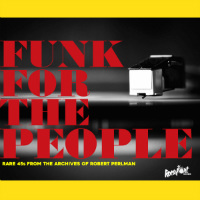 Admittedly Rocafort Records new heavy funk comp., Funk For The People, did come out about a month ago but when those autumn release gates open, trying to stay on top of them is like trying to hold back a storm surge with a rizla. Still – that’s no reason to give up battling onwards especially when a release in question contains the sort of gems this one does, compiled as it is by New Yorker Robert Perlman. Robert who? You know – Perlman – as immortalised in the Beastie Boys’ Flute Loop cut from ’94 LP Ill Communication, “Perlman’s got beats and it ain’t no secret.” Yeah – that guy. Wait – 1994! Yeah back then, long before hipsters even became aware of vinyl 7″s and it was just Keb Darge and a few others slugging it out in obscure warehouses.

So to cut to the chase then – what’s on this bad boy? Well appropriately enough, given the provenance of that Beasties’ lyric, the cuts include the fuzz guitar and flute-drenched heavy groovin’ opener That’s A Bet by Arnold Albury & The Casuals. Combo Guarajeo provide Latin shimmy business, John Fitch & Associates provides atmospheric soul and there’s also the chugging clavinet n horns-driven business of Living Colour’s Plastic People. Big as these undoubtedly are though, there’s better cuts on here – Willie Johnson’s Lay It On Me for example which is all over within two minutes but makes up for it’s brevity with a heavy stank groove. Another banger is Mark McIver’s Soul Thing which is liable to do as much on broader-minded northern soul dancefloors as it is in funkier places. The two biggest cuts however are The Hitchikers featuring Mighty Pope’s Mr Fortune (which comes on like a livelier, rawer Underdog by Sly Stone) and the insides-warming, funky soul groove that is Sloan Bey’s Look At Your Brother plea for racial harmony. Funk for the people indeed.
(Out now on Rocafort Records)

Posted on 13th November 2018 no comments