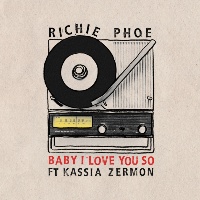 When he was considering re-making Jacob Miller’s rootsy early 90s cut, Baby I Love You So, it’s quite possible Richie Phoe wasn’t expecting to be told, “If you’re going to cover one of my favourite records, it better be fucking good.” Turns out this wasn’t a line from a resurgent Spanish Inquisition but no less chilling for the fact that it seems to have issued from none other than Massive Attack’s Daddy G. Happily things seem to have ended well, as once G had heard the remix which features singer Kassia Zermon, ups the tempo and employs both lovers rock stylings and the sort of dubby atmospheric approach not unfamiliar to fans of Massive Attack, he pronounced it, “bloody good, executed in fine style.” Bullet dodged. Check the flip of this wax 45 drop for the dub (inevitably titled Baby I Dub You So) featuring Leroy Horns on The Resonators.
(Out now (digital)/ 26 Feb. (vinyl) on Balanced Records/ Blue Mountain Music)