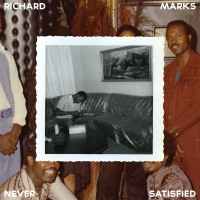 In what has already easily been the best month for album releases this year at monkeyboxing, this compilation (put together by Egon of the Stones Throw and his Now-Again Records) stands out: a seven-years-in-the-making complete collection of soul and funk singles by the legendary Atlanta singer/ songwriter/ guitarist Richard Marks. Who? Well – that’s precisely the issue. Marks, like other unsung heroes unearthed by the likes of Tramp Records (among others), died in 2006 having tragically never received the recognition that this collection reveals he so obviously deserved.

Twenty-one tracks deep, Never Satisfied, The Complete Works kicks off with nine tracks of vocal and instrumental funky soul, provides a brace of soul numbers with a more northern flavour (and lord knows, these must be rare enough for even the most fanatical northern soulie), a one-track detour into soul torch-song territory, a couple of smoother seventies soul numbers, a psych-rock gem and – ahem a small number of country-soul cuts.

Generically then, the largest section of the release is funky soul and for fans of such this is the motherlode. It contains arguably Marks’ most well-known cut – the Dyke & The Blazers-ish Funky Four Corners (along with its instro version) as well as the Crackerjack/ I’m The Man For You pairing which used to trade near the thousand dollar mark during the 90s rare groove explosion. It is also particularly worth drawing attention to the loose, insistent dopeness of You Ain’t No Good.

Elsewhere, both the northern soul cuts are dancefloor burners though Don’t Take It Out on Me just has the edge and special mention absolutely must be made of stoner psych-out Purple Haze which is a Hendrix-like number as opposed to an actual cover version. In fact, far from the maximum riffage the title might lead you to expect this comes on as a sprawling (despite its two and a half minute brevity) wah-wah-drenched kindred spirit to Hey Joe or The Wind Cries Mary with a quite staggering guitar solo in the middle.