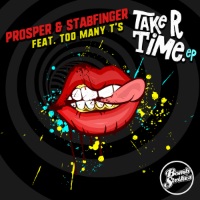 Prosper & Stabfinger return with their new Bombstrikes EP Take R Time which has admittedly taken well over a year to materialise since their last one, Fire In Me – not that you’ll be that bothered as they bring the triple threat. First up is the Too Many Ts-featuring title track which establishes the fine line the EP walks between old and new school sounds as funky hip-hop is tempered with buzzsaw synths. Stir It Up Sister continues the hip-hop vibe with the presence of K Mi and KDS rocking an MC Lyte/ Roxanne Shante vibe over an Eastern sounds-inflected beat that isn’t afraid to switch between funk and dancehall drum patterns as it bumps along. Finally, Boogie Bugi provides further Eastern influences by adorning the track’s an disco groove with Indian vocal samples. And like the chorus says – boogie, boogie, boogie.
(Out now on Bombstrikes)