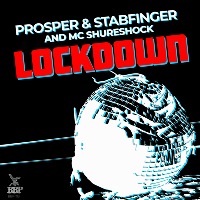 Lockdown drive you mental? Wouldn’t be surprised if it had. Still, some people kept the stir craziness at bay getting creative – Prosper & Stabfinger for instance who came up with Lockdown to drive dancefloors mental when everything opened back up again. And what you’re getting here is three different mixes of the track in question along with instros for two of them. First up is the ‘House vocal version’. Yes, that did just say ‘house’ though the vocals are rapped (courtesy of MC Shureshock) so technically that’s ‘hip-house’ and in reality they’d probably get away with describing it as ‘nu-disco’ plus an emcee rider. If that’s still too house-y for you though, you’ll be much happier with the monkey’s preferred ‘Breaks vocal version’ which also boasts additional Kenny Beeper besides Shureshock, or there’s Kid Kenobi’s pneumatic farty-bass-powered ‘Re-Funk’too. Wanna mix things up with your choice of acapella? Go ahead with either the House or Breaks instro. and then drop it to the masses so they can shake their asses.
(Out 16 April on Breakbeat Paradise)