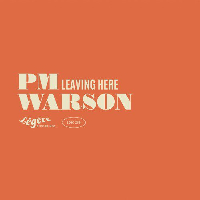 Eddie Holland’s classic early sixties R&B cut Leaving Here gets covered by PM Warson on Warson’s new single and it’s arguably our man’s best effort since Don’t Hold Me Down. Of course, this wouldn’t be the first time the track has been covered – The Who have notably had a crack at it – but if Warson’s version is (like The Who’s) faster than the original, it’s not as ‘rock’. Instead it’s a righteous R&B stomper, all swinging beat and fuzzy guitar chanks while Warson’s voice also gets a bit of fuzz applied. It’s actually not a million miles from the sort of direction Little Barrie have explored at times, though the production on this one is more intent on sounding sixties. Definite dancefloor winner either way though.
(Out 25 March on Légère Recordings)