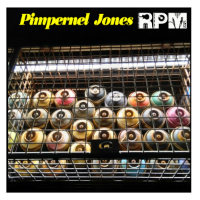 They seek him here, they seek him there but if they’d been looking for him in February, the only place they’d have found Pimpernel Jones would have been locked away in his studio as he raced against time to create an album inside a month for the 2019 RPM challenge. Did he make it? Of course he did – and the result is a seventeen-track LP of grooving head-nod beats created on MPC but also showing the signs of a year spent learning live bass, piano and more types of live percussion than you can shake your maracas at.

It’s an all-instro affair (what you want lyrics as well inside a month?!) and for the greater part leaves no turn un-stoned with a vibe that is resolutely 1995. Nevertheless the weed-smoke influence is one that the Jones isn’t afraid occasionally to leave behind and the first departure is also the longest track, Anima, which provides nearly four minutes of clattering, heavyweight, synth-driven psych-funk. The album’s other notable departures Weirdo and follow-up Palm Drive feature even more prominent synth-work and inhabit a realm once frequented by the likes of Jan Hammer, John Carpenter and Shogun Assassin musical director Hideaki Sakurai. In short, he does stoner breakbeat and retro-synth funk equally well, that damned elusive Pimpernel.
(Out now HERE)