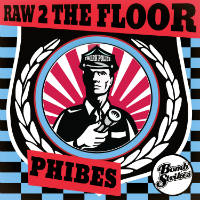 Apparently not ones to drop merely one thing when they can be releasing a three track EP on legendary breaks label Bomb Strikes at the same time as putting out a self-released ten track album on their bandcamp, the Phibes boys have done precisely that this February. The Raw 2 The Floor EP finds the pair open with the heavy artillery of the title track upon which skeletal beats vie with monster sub-bass, synth stabs and multiple vocal sample hooks while hip-hop is vocally raided for the similarly-styled but wobble-augmented Ain’t That Fresh and everything goes in the blender for the breaks of Came To Get Down, included dancehall, Rob Bass & DJ E-Z Rock.

If you’re partial to the wobble of course, an EP which is two thirds wobble-free, (no matter how heavy the breaks it brings) may have left you itching and scratching like a junkie in in a skag drought. But Phibes have thought of you too – in the form of their Ain’t No Thing – A Glitch Swing Collection which has wobble on every single track along with – as the title tells you – swing samples and glitch stylings. Numbered among these are the boys rather large take on I Gotta Woman in a 2017 version. Players (galore) for both drops below.
(Raw 2 The Floor out now on Bombstrikes/ Ain’t No Thing – A Glitch Swing Collection out now HERE)

Posted on 27th February 2017 no comments