PEOPLE UNDER THE STAIRS: Highlighter (2011) 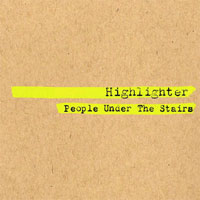 Highlighter is People Under The Stairs’ eighth album in fourteen odd years which is going some, so they must be doing something right. For this career landmark they roped in busloads of L.A. session musicians to help out and they’re also possibly the first band to release an LP not only on vinyl (hurrah!) and cd (boo!) but 24 bit HD-AAC format (!) as well. In case you’re worried that such a forward thinking grasping of twenty-first century technology has affected their previously admirable commitment to lyrical science, predominantly feel-good samples and party-starting breaks – relax – they haven’t gone all dubstep. Nope, it’s more or less business as usual and for their core following, this is more than enough. Me – I’m a bit more picky.

I still have no idea why, despite a career-long, funky-feelgood modus operandi, they seem determined to ensure that almost their entire output (and this album is no exception) lacks big lyrical hooks. The two times in their career that they’ve memorably deviated from this path, (Sugar Hill pisstake/ pastiche Hang Loose on OST and Trippin At The Disco on Carried Away) they’ve created retro club bangers with credibility. And so to the next question – ‘if they’re still doing what they’ve always done – why do you need this album?’ Well, firstly, and musically, there are a number of really strong tracks. The alt-rock guitar riff on The Time Bandit provides the basis for at least a big musical hook and if it makes the track a bit hard-edged for the funk and hip-hop club night I don’t doubt it moves the crowd at live gigs. Ditto for LP highlight Foolish People, the closest thing to a club hit on the entire LP, which revolves around a mod-rock like guitar riff, a sung psychedelic chorus and lyrics about those dodgy types that – er – want you to take drugs. Too Much Birthday has a ‘daisy age’ jazz vibe and Lesley Gore’s It’s My Party gets niftily scratched. It’s also hard to ignore the synthesised orchestral manoeuvres on the imaginatively titled Second Track which for me is the least PUTS-like track on the LP. In fact the heavy use of session musicians on this has freshened up the boom-bap template and it doesn’t hurt that using live west coast artists seems to have infused the whole album with the spirit of west coast psychedelia.

In short, they’ve freshened up the template, there’s some strong material on here that works on the stereo at home and I can see going down well with the atmosphere and crowd rapport at a live gig. At twenty tracks however, it’s overlong and unlike (for example) the latest Ugly Duckling LP, there isn’t a single track on here that I’d risk playing at the club and that is down (once again) to the lack of big lyrical hooks. People love them – why pass up the opportunity offered by all those funky beats?
(Out now on Piecelock 70)

(PRESS RELEASE)
Highlighter, People Under The Stairs’ most ambitious work to date, marks their 8th album release is the first ever album to be commercially released in the Fraunhofer 24-bit HD-AAC capturing the unparalleled group at the height of their 14 year career. More than just an indie hip-hop album, Highlighter’s outside collaborators comprise a group of influential LA indie-rock producers, engineers and live players featuring everything from full string sections to vintage vibraphones & keyboards. Recorded across a handpicked selection of Los Angeles studios, the duo dig deep into tape, consoles, obscure records and live players and emerge with a project that is both unique and yet familiar. Amidst the swirling musical landscapes, the P realize their most psychedelic album yet and continue to pioneer an alternate, innovative musical direction in rap music.