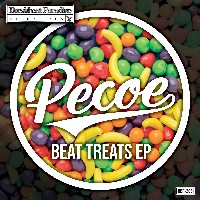 The monkey’s always got time for Oz-producer Pecoe who knows how to make modern-sounding funky breaks without slathering them in wobble bass. New four-track EP Beat Treats is a case in point opening with the uptempo Champion Sound on which our man applies a few vocal dancehall stylings over a chunky groove consisting of clean wah-wah guitar, a crunchy drum break and a farty bass line. Listen, meanwhile, sticks with the uptempo vibes but goes jangly on the guitar and neo-soul on the vocal loops before heading somewhere close to the acid breakbeat territory of certain strands of nineties big-beat. Closer Shake Your Pants is the most fun with it’s disco-breakin re-invention of an old groove while the insistent funk of the funk-drenched, throbbing bass-powered Make It Hot might just be the monkey’s favourite from this package. Beat treats indeed!
(Out now (Juno exclusive)/ Global release 30 September 2022 on BBP)

Posted on 25th September 2022 no comments