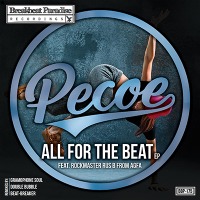 It’s all about the beats as BBP drop Oz-based breaks producer Pecoe’s fourth EP for the label entitled All For The Beat. Nine tracks deep, the release features no fewer than six Pecoe originals and three remixes courtesy of Gramophone Soul, Double Bubble and Beat-Breaker. The title-track is heavily drenched in saxophone (both tenor and bass) over clean, crisp drum breaks and it’s this which gets remixed by Gramophone Soul who retains the sax but layers on the percussion for a more rolling affair. On Shake It, our man teams up with Rockmaster Rus B of All Good Funk Alliance and heads off on a similarly uptempo funky breaks adventure continued on the bass-driven Rock That Beat which is remixed by Double Bubble who gets his wobble on. Perhaps the monkey’s favourite track on the EP is the echoey funk of Do Your Thing which comes in additional wobbled-up form via the Beat-Breaker re-version. The remaining two cuts are the Fresh Prince-tweaking Shake The Room and the lady-pleasing We Had Disco because, “before house, before acid, techno, before all of that…we had disco”…and the ladies do love disco.
(Out 13 March (Juno exclusive) 20 March globally on Breakbeat Paradise Recordings)