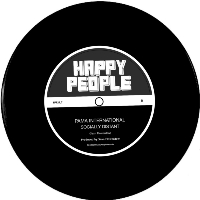 If you were wondering what was coming next from Pama International, wonder no longer as the retro-reggae-cum-soul outfit has a new LP, entitled 6, planned for the spring and you can already cop a taste of the first leak as a super limited vinyl 45, Socially Distant. Blimey, that doesn’t sound like a barrel of laughs does it? And you’d be right. But that’s because the band aren’t
going for that type of feel, instead seeking to provide a sense of gravitas utterly missing from the actions and words of the jokers currently running the country about circumstances under which some people have lost everything. The press release puts thus: “This isn’t an album for the dance floor, just as the times aren’t. This is an album born out of isolation, a time to pause, a time to reflect on the simplicity and beauty that is around us no matter what.”. Expect a slowie featuring smouldering organ and lyrical sympathy from singer Jewels Vass.
(Out 1 March on Happy People Records)

Posted on 30th November 2020 no comments