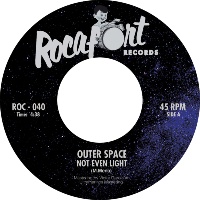 Billed as ‘Ethiojazz’, the new 7″ single from Barcelona crew Outer Space is certainly on more than speaking terms with the work of Mulatu Astatke. Having described it thus, doesn’t do justice to the breaks-filled funk of A-side Not Even Light however, which – though its title recalls the time-honoured plea of the late riser or hangover sufferer, is lively enough to get anyone out of bed and writhing to its sinuous tones. B-side Dead Planet featuring Gemma Humet meanwhile, is a haunting psychedelic gem liable to give those awake a sense that they’re still dreaming – and of vast astral journeys at that. Perfect if you’re currently reading William Hope Hodgson’s classic cosmic horror novel, The House on the Borderland, like the monkey.
(Out 2 March on Rocafort Records)

Posted on 7th February 2021 no comments