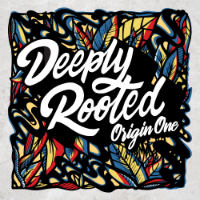 Following a pair of promising singles over the last two years comes Deeply Rooted, the debut long-player from Origin One a.k.a Nottingham-based producer Kevin Thomson. An eleven-strong affair, it delivers a varied cross-section of bashment sub-genres from roots reggae to jungle and features a wealth of vocal talent. Indeed a different guest on every track (bar the one instrumental) though Sheffield’s K.O.G. appears twice – once on his own and the second time with MC Spyda.

The LP is book-ended by a brace of rootsy reggae cuts, with Tenor Youthman delivering a call for unity on the uplifting World Peace while Dandelion comes over somewhat more thoughtful on closing bubbler Trying. Junglists will be kept happy by the Spyda and K.O.G-featuring Tribute while the evilly pulsing synth bass of My Yout’ provides for grime fiends as Irah reports from the frontline. The lone instrumental is Dread And Buried, a slice of digi-dub appropriately characterised by spooky echoes and scuttling, spidery percussion and synth motifs. Of the three best cuts, one is the itchy, skanking boom of former single Mi Bredrin on which Parly B effectively invites anyone who will listen to silence the violence and increase – a message that couldn’t be more timely given the murder rate in an austerity-era UK. The remaining two are obvious choices for potential future singles – the uptempo skank of Nice & Easy on which Gardna and Nanci Correia do verse and hook respectively and the reggae hip-hop boom of High Grade – another track built around pulsing synth bass which unusually for a bashment cut named High Grade is actually about top marks for an essay. Just kidding. Of course it’s about weed.
(Out now on Nice Up!)