ON THE SPOT TRIO: Hefe 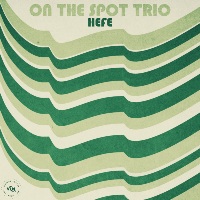 It’s amazing what you can find time to do during lockdown. In On The Spot Trio’s case once such thing is finally releasing a track they recorded six years ago – Hefe – which, it turns out, isn’t just your favourite Instagram filter. This guitar n Hammond-drenched affair presents the sunnier side of funky psychedelia and was recorded by the band in 2014 at the Iron Wax Studio of Soulive drummer Alan Evans – perhaps unsurprisingly since OTS’s Kris Yunker is in Evans’ band the Alan Evans Trio. According to the PR blah, it seems the track was written on the beaches of Santa Cruz by the whole band – the other two being drummer Jeff Wilson and Star Kitchen’s Danny Mayer – all of whom were clearly un-phased by the challenge of having sand blown over their efforts and showed the Santa Ana who was boss. Or rather hefe.
(Out now on Vintage League Music)