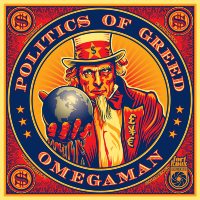 Look sharp – it’s all righteous fire from Omegaman feat. Kromanauts here on their soon-to-drop new single. That’ll be the thunderous, guitar-led funky reggae riddim that is Politics Of Greed then with lyrics that – you guessed it – exhort listeners to stick it to the man. What’s not to like? Omegaman did the bassline, Allniters & Ozskas’ Marty Fabok laced that with guitars and then Kromanauts added additional guitar and voice. In case that’s not lairy enough for you, it comes accompanied by the instrumental, a dnb remix from Waggles that recalls Aphrodite’s BM Funksta 90s period of jump-up d&b and you even get the instro of that as well!
(Out 14 August in Fort Knox Recordings)

Posted on 4th August 2020 no comments