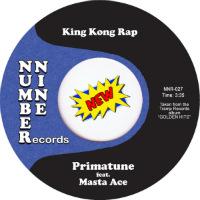 Celebrating Munich hip-hop with an LP compilation? You need a lead single to promote it then! Preferably something on 45 (since that is the format de jour) and preferably something big and hairy. Step forward Primatune with their boom-bap beast King Kong Rap featuring none other than Juice Crew luminary, Masta Ace. Blimey – that is very big and very hairy. Expect drums that set puddles of water quivering half a mile away and rhymes that bite. Naturally the flip deserves something a bit special too so it’s lucky Blockboy is on hand with electro b-boy bump Bunnybreak which’ll have ’em flipping off the wall like Lucille Ball. This is the third seven inch in just over a decade from Number Nine Records though since the last one was Mako & The Hawk’s Devil Made Me Do It b/w Strut Your Stuff from 2016, they do seem to be picking up their output. Full LP Golden Hits – 10 Years of Munich Hip Hop follows shortly.
(Out 6 April on Number Nine Records)