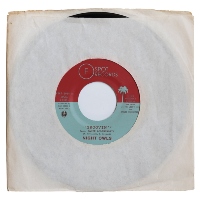 No sleep for L.A.-based, retro-reggae supergroup Night Owls who are back already following August’s Gossip single with new 45 Groovin’. As is their wont, the band have flipped an old soul classic – in this case, Groovin’ (though the Wu-Tang-sampled Willie Mitchell version rather than The Young Rascals’ original) into something rather more early reggae in style. Jungle Fire’s Jamie Allensworth keeps the vocal full of soul while reggae sunshine is supplied by the rest of the band consisting of various members of The Lions and The Aggrolites organ don, Roger Rivas, whose keys take the lead for the more Mittoo-esque B-side instro version. If you’re down with The Caroloregians and The Aggrolites, this’ll be right up your alley.
(Out 23 October on F-Spot Records)