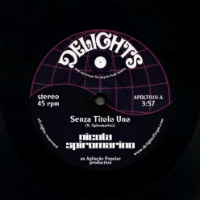 The next way-out treat from Markey Funk’s Delights label is this hot little 45 – Senza Titolo Uno/ Senza Titole Due. It’s the work of Italian-born, Berlin resident Nicola Spiromarino who has been tinkering away in his home studio so that he can unleash these two slices of synth-drenched library funk the titles of which translate as ‘Without Title One’ and ‘Without Title Two’ – or as the monkey likes to think of them, ‘The Tracks With No Name.’ The vibe is less Sergio Leone than it is Dario Argento however and if the first stylistically tips its hat to Delia Derbyshire and has undertones of the mysterious, things become downright spooky on the second which nods to a certain Mr Carpenter.
(Out 26 October on Delights Records)

Posted on 25th September 2018 no comments