NICKODEMUS feat. THE REAL LIVE SHOW: ‘Give The Drummer Some’ remixes (2013) 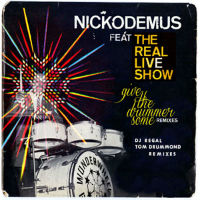 Next time someone says, “Man, you gotta listen to this” adding earnestly (just before they press play) “…these are the breaks” – stop them. Explain that you have heard the breaks and few people since Kurtis Blow can lay as much claim to his immortal words than DJ Regal (of Wiseguys fame) with his ‘B-Boy Drum Flip’ of Nickodemus & The Real Live Show‘s 2005 cut Give The Drummer Some. It’s the living essence of b-boy hip-hop – a stripped-back big fat drums scenario where even the bass sounds like an afterthought. “Man – that’ll never work!” “Yeah? Best keep that thought to yourself.” Comes with an instro version and something a little more newfangled from Tom Drummond. “Give the drummer some, bring in a beat and then bring in another one/ Rub a pum pum, that’s where the whole vibe come from.” I’m not arguing.
(Out now on Wonderwheel)

Posted on 23rd February 2013 no comments