NATHAN JOHNSTON & THE ANGELS OF LIBRA: Angel Of Libra 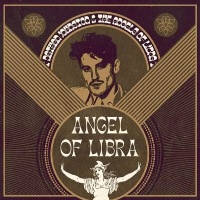 There’s a nice bit of atmospheric soul on this one as Irish singer Nathan Johnston teams up with Hamburg-based outfit The Angles Of Libra for new single, Angel Of Libra. From the off, it’s all moody organ chanks over a ride cymbal-drenched groove, later joined by strings to make for a truly epic sound as Johnston rasps gorgeously over the top about lost love. How to represent such goings in audio-visual format though? Perhaps a sepia-tinted video, apparently inspired by Peaky Blinders, in which Johnston does his best Arthur Shelby, haunting parks, bars and finally a graveyard. Check it out. By order of Waterfall Records!
(Out now on Waterfall Records)