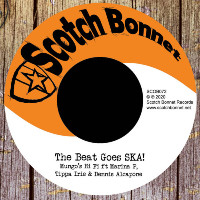 Here’s news that Glasgow reggae commandos Mungo’s Hi-Fi have got together with vocalist Marina P (featured on the band’s recent reggae re-version of Smashing Pumpkins’ Soma), Tippa Irie and Dennis Alcapone (!) to get all ska on Sonny & Cher’s The Beat Goes On for Record Store Day. Technically, the official release date was 29 August which makes this bit of MB love a bit tardy. Having said that, it’s the monkey’s understanding that Record Store Day isn’t until 26 September so a late August release for this is what you might call a long lead time plus the record appears to be having some sort of drip feed release throughout September as it appears in different stores on different dates. Not that it’ll need much help selling – for this is every bit the dancefloor sureshot you’d imagine a ska-ification of this classic track being – especially with this line-up in charge of proceedings.
(Out now on Scotch Bonnet Records)

Posted on 20th September 2020 no comments