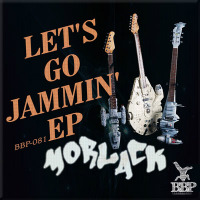 Let’s Go Jammin’ says Morlack. Oh go on then – where first? How about a funky breaks wobble through the early 80s – specifically a very Kool & The Gang corner of the early 80s. Oh la la la – let’s go dancing! Now then, if that didn’t get your back up off the wall, what about a pumping squelchy-bassed platform for the most unlikely rapappella to get used this year by a breaks producer? That’ll be K-Os’s Neutroniks. Next is a bit of breakbeat-soul-jazz-hop with Lord Finesse to keep the crowd listening and you kind of feel like you’ve divined the overall vibe of this EP when, suddenly, there’s all this noise up ahead. Another Wu banger? Kind of. How about a ghetto metal version of Da Mystery Of Chessboxin as Morlack strides boldly into a domain previously only inhabited by Junkie XL, The Prodigy and Pulpfusion. Clearly comfortable in Satan’s own realm he remains there, dreadlocks flying, the horns proudly thrown out, for final track When The Problems Are Dead which appropriates a funk metal cover of Freddie’s Dead by L.A. ska-funk-punks Fishbone and sprinkles a little Q-Tip on top. A concoction that I’m willing to speculate Curtis Mayfield would never have predicted back in ’72 when he wrote funky mellow lament Freddie’s Dead for blaxploitation flick Superfly. Previews below plus the Thunder Banger vid..
(Out 21 November on Breakbeat Paradise)

Posted on 19th November 2013 no comments