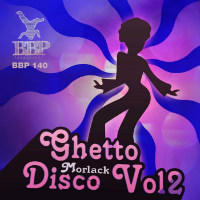 It seems like barely a minute since Morongroover and Mr Bristow popped the cherry of a new Breakbeat Paradise series – Ghetto Disco – and now here’s Morlack with Ghetto Disco Vol. 2. Being Morlack of course, he’s not only gone one track deeper than Vol. 1 (taking this to five tracks) but his ‘ghetto’ take on disco benefits from his magpie-like approach to sampling. Take in your face opener – er – In Ur Face – which from squelchy bass antics suddenly and briefly gives way to a bridge culled from a Nu-Yorican Tito Puente classic. Show Me How and Smokin ‘n Drinkin provides Lord Finesse and Tha ‘Liks respectively with the disco vibe they always needed but never knew they wanted, while Roxanne Shante’s diss-rap addressed to pretty much every other female MC of note in ’92, Big Mama, gets the full buzzsaw bass treatment. All of which just leaves space for the dancehall disco of Come & Get It which – however unlikely sounding – works a treat and is the pick of the bunch.
(Out now Juno Exclusive/ Globally 27 Oct. on Breakbeat Paradise)